"Reverend Lambert", is the evangelist in the local community. He can fire out more blah, blah, blah,  than any other ovine in the territory. He is staunchly against shearing as he feels it promotes public nudity and breeds lewd behaviour from the male members of the flock. As you might expect this is not seen as a problem to everyone.  He heard about the party from Ranger, a neighbours herding border collie. Of course he says he was morally obliged to attend to save members of the flock from the evils of wretched excess. A few close to him say he likely just wanted to get drunk and have fun and hang with Roxie. Nonetheless he is putting on a good show for the Sheriff giving a jail cell sermon to the others. He hopes the truth doesn't come out. 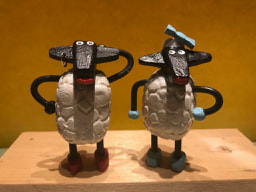 Trixie and Roxie are what the others call "Ewes of Evening". They are from the next farm down the road. They heard about the party from their "handler" Hugh Heffer. Trixie is the one with the earring and Roxie sport a blue ribbon in her hair and matching shoes. I'm not exactly sure how she got the blur ribbon and I don't ask. Even this temporary penal incarceration doesn't alter their enthusiasm and keep them from seeking business opportunities  They seem to have caught the eye of Lance, a handsome young ram, and they seductively wiggle and twist in an effort to arouse his interest. When paired together they may be too much for the self-styled macho man, leaving him embarrassed and sheepish.  They keep trying, There are little mouths to feed back home and Hugh will expect some return for management services. Will the madness ever stop? 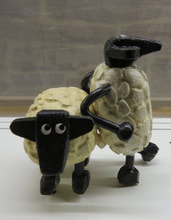 Lance and Hassock, have been close friends since birth. Hassock idolizes his dynamic friend Lance and lives his life vicariously through him. He always there to support him even as a leaning post in this situation. Deep inside Hassock would give the wool off his back to have half of what Lance has, but he is too timid to step futon his own. Lance leans on Hassock as he acts out his most macho persona for Trixie and Roxy. In reality he is rather inept at flirting. He thinks his best pickup line is. "Hey Babe, you don't have much manure stuck in your wool".  What Lance doesn't realize is that Trixie and Roxie really have eyes for the big-boned and handsome Hassock, not Lance. In fact neither does Hassock! This could make for an interesting evening yet! 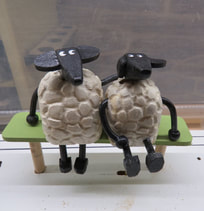 Romeo and Juliet just met at the party this evening. It was love at first sight. Romeo snuggles into Juliet's shoulder. He is enamoured with his new love. Romeo came from a large family and perhaps did not receive as much love as a lamb as his siblings did.  Juliet still eyes him a little suspiciously, even though she too has been bitten by the love bug. As a lamb her mother warned her about the "wolf in sheep's clothing". This meeting seems too good to be true. She wishes her mom was here to advise her. Their relationship could work though, Romeo likes watching sports on TV, drinking, listening to ACDC, farting, and gambling. Juliet writes poetry, desires a big family, wants to travel, and become a Celtic singing star. She loves music by  Enya and often performs at local birthday parties. Sounds like a match made in heaven. 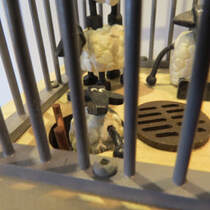 "McQueen" is the mastermind of aggression   No one messes with him.  Large dogs will cross the road when they see him coming. He emigrated from the north coast area arriving on a  rickety lorry.  Shortly afterward he arrived he amassed gambling debts and dissolved into this farm's flock to remain hidden from loan sharks. He had organized the gambling table for the party hoping to win money to pay back some of his debts . A former WSFW (World Sheep Federation Wrestling) wrestler he retains an ardent following and many still collect in vacant pastures on Saturday nights to watch him  brutalize any challengers. Few dare to ask about the concussion protocol in the WSFW.  It is not clear whether this might be the cause of his constant edginess and illogical decision making! At he next shearing he intends to grab the shears and shave the head of Farmer Brown. 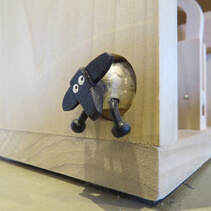 Plug is plumpest of all the flock. His ability to "chow down" far exceeds any other member of the flock. He came to the party because he heard there was to be a buffet. It looks like he found it because he now finds himself stuck in the escape tunnel. Normally the others don't mind the fact that he is fat because they feel that he provides a more attractive target for any wolves eyeing the flock. He may find himself getting a good swift kick when the others find out he is blocking the path to freedom. His party date is still up in the jail cell fast asleep after consuming excessive amounts of grain alcohol. Plug felt making his  escape from jail and his somewhat annoying blind date would be an opportunistic move. His mother had hoped he would grow up become a doctor and have lots of children, but it seems parents don't always get what they want! Plug's aspiration is to one day become a wooly doorstop. 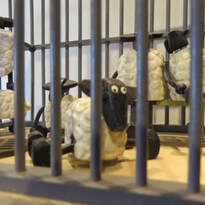 "Unsteady Eddy" has had too much to drink. He can't even standup. Every attempt finds him sliding back to the ground. It is an ironic as Eddie once dreamt of being a premiere dancer in "RiverDance". As a lamb he danced so much he wore the soles of his hooves down so much that even today he only have soft leather padst.  Having ruined his chances to dance anything but soft shoe, he turned to drinking.  He often lays alone in the pasture starring into the sun, watching tour buses pass by, and drinking  bottles of Woolite, He doesn't want to go to rehab, No! No! No! He can't even remember having fun at the party because he was drunk before the fun even started! The only glimmer of hope for Eddy is that he was thinking of running for a position on city council. 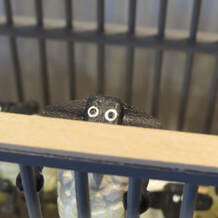 "Shorty" is a confused young lamb looking to find herself. She is beginning to realize that his group my have different values than she does. This sudden discomfort has caused her to scale the cell wall to separate herself from the rest. She is worried what Farmer Brown will think of her as a result of all of this. She has a soft spot for Farmer Brown following him around endlessly since his wife died.  She fancies herself living in the "big house" with him, cuddling on the sofa watching BBC nature documentaries narrated by David Attenborough. What prompted these thoughts is uncertain. There has been lots of gossip amongst some of the others which I am sure is unfounded. She attends counselling sessions that she believes will help focus her dreams an set her on a path to achieve her goals once she figures them out. Nonetheless she seems to have a blank stare most of the time. 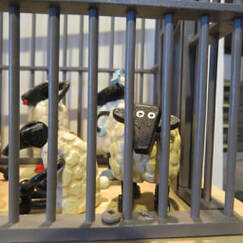 "Wilbur the Bewildered" can't believe he finds himself in this situation.  He's pissed. He thought last nights gathering was a Star Wars event organized by the local SciFi club. He wasn't prepared for the boisterous gathering. He had attended with his friend Leonard but they became separated early in the event. Leonard is missing and Wilbur suspects he slipped away and is sleeping in a barn somewhere, and now here he stands  in  jail. Wilbur wishes he had stayed home to play Dungeons and Dragons instead of following Leonard to the party last night. He knows his mother will be devastated when she finds out where he has been and he will likely be grounded for weeks. After watching the antics of Reverend Lambert over the past few hours he may considering recommending to mom that they change to a different congregation. He figures he may not know a lot about sinning but he Reverend seems to have too much first hand knowledge. 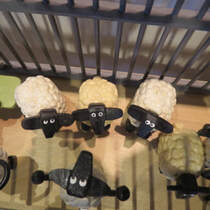 Ollie the Orator loves an audience! Even in jail he spouts off to anyone who will listen.  Here he has trapped  Curly, Harry, and Mohair", as a captive audience. They don't really understand but they feel it is only polite to nod their as he rants,  Curly and Mohair who tends to nod in disagreement while Harry nods in agreement. Consensus is rare among inebriated sheep.  Ollie spouts conspiracy theories, political rhetoric, and stories of social injustice. He is a perfect party guest.  The Sheriff will soon figure out that Ollie will be the first to spill his guts, ratting out the organizers of the gathering. No one really likes Ollie, but he will never notice. He is an expert at herding and trapping small groups in corners to listen to his drivel. 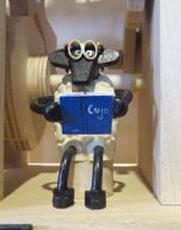 "Page" is an avid reader. Once an escape route was identified she chose not to flee but to avail the opportunity to hide in the basement of the jail where she could continue  reading her current book in seclusion. She has 8 children and an unfaithful husband.   Her life is a mess, but when she reads she's loses herself into the stories she reads.   Luckily she comes from a large family and her mom, dad, aunts and uncles all help with minding the children while she pursues her escape in books. Why did she bring a book to a party in the first place?
​
Click Here to return to the Baa Baa Bad sheep Page